Ramon Sir is honoured, excited and proud to have the opportunity to be involved with Dove. His interest in Dove comes from a family and community based values.  He believes in the saying “Prepare to protect, practice and plan to prevent."

His journey began in 1993 when he invested two years into Taekwondo, at that time he decided not to complete his Black Belt test. Then in 2000 while he was completing his sport focused massage therapy certificate in British Columbia (a three year program), he returned to Taekwondo for one year. Ramon Sir has also taught swimming lessons, life guarding, and first aid. He completed his Certificate in Adult and Continuing Education at the University of Alberta, and continued to develop his knowledge and skills through the martial arts of Aikido, Wu Shu, and Qui Gong. Ramon Sir has also been able to apply his martial arts training and skill by participating in tournaments, and through three years of working in security

He has refocused on Taekwondo, and during the last two years he has been retraining in the art under Master Le at Spirit Taekwondo and he hopes to achieve his Black Belt this December.

His journey is now focused on supporting families and friends by mentoring healthy values for the mind, body and spirit through teaching at Dove. His goal in teaching is to create a supportive family class that brings together Taekwondo, play, and healthy self-image.  In combining these elements he hopes to build a confident, fun, supportive, and diverse community under the wings of Dove. 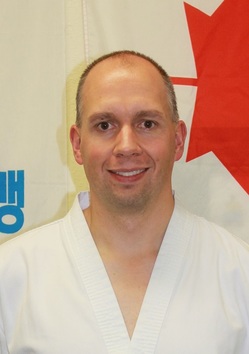 Glen Sir has been interested in learning a Martial art for as long as he can remember, but had never had the opportunity to take a class.  When his son wanted to learn taekwondo, Glen sir thought it would be as good a time as any to start learning, and so in February of 2013 he  began taking taekwondo as a student at Dove.  Soon after that, he was hooked and eagerly started his journey towards his black belt.  At the beginning of the 2013-2014 season, Glen Sir joined the Dove executive committee and started lending his life experience to the running of the club in addition to his training.  Then at the end of the 2014-2015 season, the executive committee learned that they would be loosing the L'il Doves instructor the following season.  After the committee's search turned up no prospects over the Summer, Glen Sir felt called to take on the teaching position and stepped out in faith to teach the L'il Doves class; even though he was unsure about teaching so many young kids.  Glen Sir can now testify that God is faithful when we step out in faith.  He is thrilled to be teaching the L'il doves and hopes that they are having as much fun as he is!